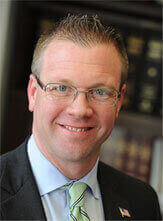 Jim grew up in the western part of New Jersey, on the outskirts of Belvidere, where his father maintained a law practice until 2011. A 1996 graduate of Seton Hall University, Jim concentrated his undergraduate studies in government and law. He received his law degree with honors from Seton Hall University School of Law in 1999, and joined the Law Offices of David Spector where he initially concentrated in plaintiffs’ personal injury cases.

After the law offices moved to Millburn in 2000, the practice expanded into other areas of law, including transactional matters. Following David Spector’s retirement in 2009, the firm evolved into Spector Foerst & Associates, with Jim as its managing partner.

Jim currently serves as prosecutor for the Borough of Mountainside, and is an adjunct professor focusing on zoning, planning and land use policy at Seton Hall Law School. He has been named a New Jersey Super Lawyer every year since 2011, and is certified by the New Jersey Supreme Court as a Civil Trial Attorney, a designation earned by less than 1 percent of attorneys in the state.

Jim lives in Westfield, where he serves on the Recreation Commission; he is also a Member of the Board of Directors of New Jersey Camp Jaycee, an ARC-affiliated summer camp. He and wife Cara, who met at Seton Hall Law (where she is currently Dean of Academic Affairs), are parents of two boys. Also a runner, Jim ran the New York Marathon in 2014.